The name Lakhimpur is believed to be originated from the word Lakshmi, the goddess of prosperity. The district is mainly dependent upon agriculture and paddy. Paddy is regarded locally as Lakhimi. The word pur means full. Lakhimpur therefore means full of paddy or the place where paddies are grown abundantly. Besides, the soil of the district is alluvial and fertile for which crops flourish without use of any artificial manure or hard labour. Over and above fish, meat, vegetables, milk were abundant in this district. Others say that the word originated from Lakhsmi Devi, the mother of Bhuyan Raja who was the descendent of King Arimatta.

The first Medical School in Assam i.e. Berry White Medical School, was started at Dibrugarh in 1900. In 1947, the first Medical College of Assam was established on the existing structure of Berry White Medical School in Dibrugarh to produce MBBS Doctros. However, with the increase in demand for doctors, the second and third medical colleges were setup in Guwahati and Silchar in 1960 & 1968 respectively. Although these medical colleges have grown significantly, they were not able to meet the growing demand for qualified medical persons throughout the state, creating a big vacuum in the Health Care delivery system. 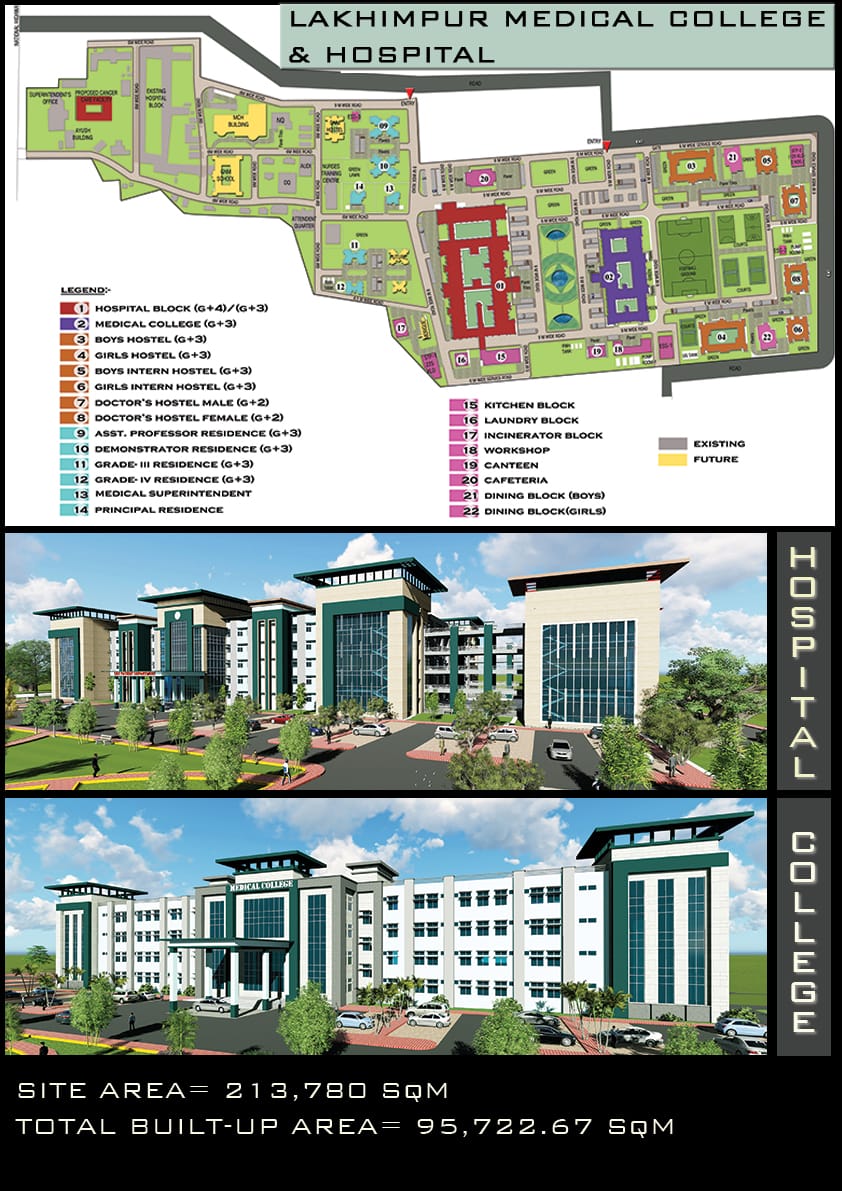 District of Lakhimpur spreading over 2277 sq. km and accommodating a population of 10,42,137 (Census, 2011) was chosen as a site for Medical College for its strategic location in Northern part of Assam. This medical college will cater neighbouring districts of Majuli, Dhemaji, Biswanath and Sub-divisions of Gohpur, Dhakhuakhana and nearby places like Bihpuria, Narayanpur, Gogamukh including the state of Arunachal Pradesh. Before establishment of this medical college, Lakhimpur District was served by North Lakhimpur Civil Hospital since 1987. On 8th January, 2021 vide Govt. order no. HLB.176/2020/8, North Lakhimpur Civil Hosptial was almalgamated with Lakhimpur Medical College and Hospital.

To push the boundaries of innovation and discovery, renovate the present healthcare system, advance medical education, and create a pool of healthcare providers.